Should we ban the burqa in England?

The country’s aim of ‘living together’ justifies the law, said the ECtHR. 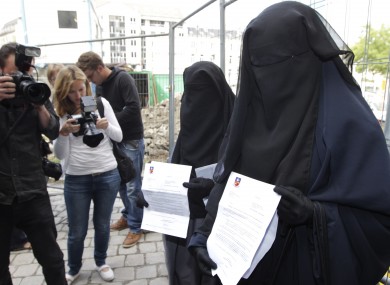 Two sisters who were fined each €50, after they were caught wearing the full veil in public, show their citations to media outside the town hall in Brussels in August 2011.
Image: AP/Press Association Images

THE EUROPEAN COURT of Human Rights has upheld France’s ban on wearing a burqa in public.

In a Grand Chamber judgement published today, the top rights court ruled that there had been no violation of the European Convention on Human Rights.

The ruling was based on France’s aim of “living together” with the court accepting the State’s argument that a barrier to other people’s human rights was created by women wearing the burqa.

This barrier centred on the fact that it could stop people from feeling they could socialise with others, breaching their human rights to live in an inclusive society.

France implemented a law in 2011 which prohibited women from wearing full-face veils in public spaces. If found doing so, they could be fined up to €150 – a penalty that was considered “among the lightest that could have been envisaged”.

The law is based on banning the concealment of one’s face in public places and the court ruled the country was justified in doing so in the interests of social cohesion.

The case was taken by a French national – a practising, 24-year-old Muslim woman – who said she wanted to be able to choose to wear either a niqab or burqa.

A niqab is a full-face veil leaving an opening only for the eyes, while the burqa is a full-body covering with a mesh over the face.

She said she took the case “not to annoy others but to feel at inner peace with herself”. The applicant believes the ban infringes her right to respect for private and family life, freedom of thought, conscience and religion and freedom of expression. She also filed the suit under Article 14 of the Convention which prohibits discrimination.

She complained that the ban led to discrimination on grounds of sex, religion and ethnic origin, to the detriment of women who, like herself, wore the full-face veil.

She told the court that neither her husband nor any other member of her family put pressure on her to dress in a certain way.

France argued that the applicant was not a “victim” as no individual measure had been taken against her but the court dismissed the argument, stating that if a person has to change behaviours because of a law, then they are entitled to question it.

However, the court eventually emphasised that respect for the conditions of “living together” was a legitimate aim for the measure. It added that as the State had “a lot of room for manoeuvre” with regard to this general policy question on which there were significant differences of opinion.

The court agreed that France had “legitimate aims” of public safety and the protection of rights and freedoms in drawing up the legislation but dismissed the argument of public safety, stating that a full ban would not have been required to achieve the aim.

However, it did agree that the aim of “living together” could be undermined by the veil.

In that connection, it indicated that it took into account the State’s submission that the face played a significant role in social interaction.

“The Court was also able to understand the view that individuals might not wish to see, in places open to all, practices or attitudes which would fundamentally call into question the possibility of open interpersonal relationships, which, by virtue of an established consensus, formed an indispensable element of community life within the society in question.”

Therefore, the Court ruled that by wearing a full-face veil, people could be breaching the right of others to live in a space of socialisation.

The Court said it examined whether the ban was proportionate to the aim of “living together”, admitting that it might appear excessive to opt for a blanket ban given the small number of women concerned.

It also conceded that the ban did have a “significant negative impact” on the situation of those women and that “many national and international human rights bodies regarded a blanket ban as disproportionate”.

The judges stated that they were “very concerned” by indications that the debate which preceded the adoption of the law in 2010 had been “marked by certain Islamophobic remarks”. They added that such legislative process could contribute to the “consolidation of the stereotypes”.

In the end, however, the Court ruled that the ban was not expressly based on the religious connotation of the clothing in question – but “solely on the fact that it concealed the face”.