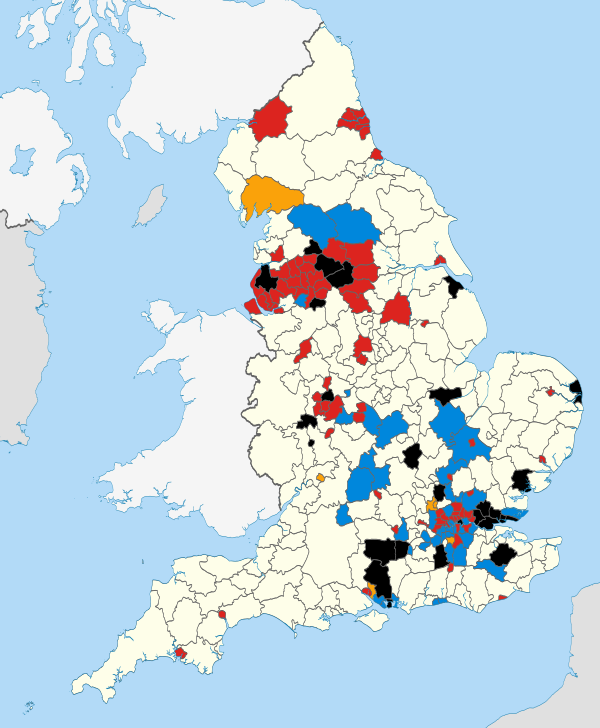 MAY 2018 ENGLISH LOCAL ELECTION RESULTS?
So what have we learnt as a result of the English 2018 local elections? Are they a political “watershed” milestone in English politics?
The first thing to note was that so far as the Labour Party was concerned, despite wildly optimistic predictions from the ideological Left and others, like Sadiq Khan, Labour only did well in areas where there was either a preponderance of politically correct Middle Class, mostly State employees, often with non-traditional value lifestyles, or in areas heavily dependent of welfare benefits, or where “ethnic minority” immigrant populations have become dominant. Labour is continuing on its path of becoming the multiculturalist “Rainbow” Party!
Elsewhere in England, Labour made very little progress.  As Prof Matthew Goodwin of Kent University and Prof John Denham of Winchester University and also the English Labour Network were correctly predicting that, in all the areas where people still predominantly identify themselves as being “English”, under its current policies (where Labour politicians can barely mention England or the English), any hopes of a Labour breakthrough were doomed.  This has proved to be absolutely correct.

See:John Denham: Why does our Labour Party refuse to talk about England? >>>> https://labourlist.org/2018/04/john-denham-why-does-our-labour-party-refuse-to-talk-about-england/

And: Why Labour Needs An English Manifesto >>>> https://www.huffingtonpost.co.uk/entry/labour-manifesto_uk_5a7d8cd3e4b044b3821c372f
Such progress as Labour did make can be explained either: 1/ by a collapse of the Green vote, (most of whose voters went back to Labour except for where the “Progressive Alliance” was effective; for instance in the London Borough of Richmond upon Thames, where 29 seats changed hands.  Almost all of these were lost by the Conservatives, and they all went to the “Progressive Alliance” of Liberal Democrats and Greens.  This success has led to some support from Labour MPs for Labour to join it >>> https://www.theguardian.com/politics/2018/may/07/labour-mps-revive-campaign-for-progressive-alliance, ;
Or 2/ by the third of former UKIP voters who appear to have voted Labour.
These former UKIP voters have probably gone back to Labour on a conditional basis thinking that Labour is still committed to its General Election promises of ensuring a full Brexit.
However if Labour’s Parliamentary Party continues on its trajectory to become more Remain supporting and undermining of Brexit, this vote may easily be switched next time to parties that are genuinely in support of leaving the European Union.  It would appear that Labour’s deceitfulness and disingenuous on the Brexit question has to some extent worked – so far!
So far as the Conservatives are concerned, they are projecting this result as a great success, given that it was mid-term into a Government.  However it seems obvious from a look at the statistics that in fact their success, such as it was, was dependant on both hanging onto their own vote and also recruiting an average two-thirds of the former UKIP vote. This means that their continued success is very dependent on their Government maintaining a reputation for working towards leaving the EU.  This is however a Government which will have had to have achieved Brexit by the time of the next General Election. If they have failed to deliver a satisfactory Brexit by then, this result contains a strong hint of severe troubles to come for the Conservative and Unionist Party!
The result also does show that the Conservative leadership have again successfully used their long-standing tactic (also true of the majority of “Conservative” MPs, including Theresa May) of being dishonest and disingenuous by pretending to be Eurosceptics.  It is worth remembering that when the decision time came in the EU referendum they came out as Europhile “Remainers”.  If their true position has become clear, to those that voted Conservative this time, by the next election then I would say “woe betide” the Conservative Party – if there is then a credible alternative.
The leaders of both Labour and the Conservative Party, Jeremy Corbyn and Theresa May, are clearly both liabilities for their parties, not only personally but also through political ideology.  If either Party were to exchange their current Leader with someone more in tune with real mainstream opinion in England, then their rivals would be in serious trouble come the next General Election.
So far as UKIP leadership is concerned the results were disastrous.  I understand, but didn’t hear her say it, that their Suzanne Evans MEP has said that the results show that “UKIP is over”.
In my view, UKIP’s Party members and voters have done England a tremendous service in forcing Cameron to give us the EU Referendum and helping to ensure that it was won for Brexit.
It was always going to be difficult for UKIP to adapt itself, given the disagreements amongst its members and supporters on most other issues other than wanting to come out of the EU, UKIP’s Leadership troubles have of course also contributed dramatically to breakup of UKIP support.  Having blocked UKIP branches from supporting a democratic Brexit voice for England with a ‘Brexit’ English First Minister they have failed their membership by gifting to the Conservatives the Eurosceptic position.
What these election results show however is that, if Brexit is not satisfactorily delivered by the Conservatives, and English interests continue to be ignored by both Labour and the Conservatives then there is a crying need for the English Nation to have a political party which will speak up for us.
UKIP leadership has missed its English democratic chance but UKIP’s membership does have a natural place to go if they want to! They still can make their voices heard above a corrupt and out of touch British “Remainer” elite.
I, of course, think that English voice will be only found in the English Democrats.  In the coming months, I and other English Democrat activists, will be working to encourage over to our Cause of open English nationalism, all those English voters who care about England’s future, to come over to us so that will be able to effectively represent the English Nation. My message is:- Don’t give up your political voice, Don’t allow yourself to become a ‘ sad returner’ to the tired and old LibLabCon political group. England needs you! The English Democrats are here for you!
As Helen Lewis, the Deputy Editor of the New Statesman (aka Helen Lewis-Hasteley and married to Jonathan Hayes the Digital Editor of the Guardian) said on BBC Radio 4 on the 4th May just before the 9.00 o’clock News, the only way for UKIP to have been able to come back would have been as an English nationalist party.  Being a Labour “Remoaner”, she of course thought that would be “ugly”.   I will leave you to imagine what I think of that!